selected to the 2009 MLB All Star Game:  Ryan Braun, Kevin

Ryan was selected as a starter by the fans, receiving the

highest vote total amongst ALL MLB outfielders!!!!  A huge

Chai 5 for the Hebrew Hammer!!!

Spring but was in a tight battle with Mark Teixeira, who 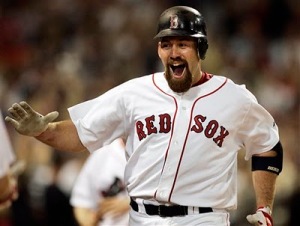 Youk is thrilled by his selection!!

Youk, deservingly, was selected to the team by Tampa Bay

Rays manager Joe Maddon, who is an idiot (see below).

Rockies starter, Jason Marquis, who is leading the NL in

wins with 10  11, was selected to the NL team by Philadelphia

However, I have a HUGE shankbone to pick with Ian Kinsler

being left off the team!!

Ian was the leading vote getter amongst AL second basemen

all the way up to the final vote, then somehow, scruffy Dustin

Dustin at the plate

So who does Joe Maddon pick??  His own guy, Ben

Zobrist getting attacked by the batting cage.

all respect for him.  Not picking Ian so that his own guy is on

He must have had WAYYYYYYYYYYY too much of that

wine he likes when making that choice

or Zobrist must have something on him!!! 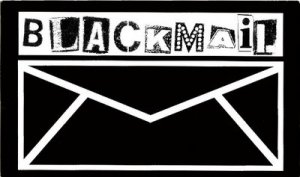 Below are the total votes received and the resulting rosters.

I’ll leave it to you, my loyal readers, to determine whether

these rosters are fair or not.  You already heard my opinion

about Ian.  So please go to http://mlb.mlb.com/index.jsp and

cast your votes for Ian!!!

Ripken’s streak was the sixth-longest in major-league history

I’m not sure that any of these guys have played in 1,000 total

games, but they are my guys, so let’s see how they did on

Brad didn’t play in the Dodgers loss to the ChiSox.

Craig didn’t pitch in the the A’s loss to Giants.

Scott didn’t pitch in the Rangers win over to the D-Backs.

in the Pirates win over the Indians. He lowered his ERA to

one of the Rangers’s two runs in their victory over

Ian has earned something to nosh on!

starts this season. Jason, who was trying to tie for the major

league lead in wins, retired only nine of the 21 batters he

faced and allowed eight runs, nine hits, including a homer to

Vlad Guerrero, and two walks on the way to raising his ERA

“I couldn’t command my pitches, couldn’t make the

adjustment. I put my team behind the 8-ball,” Jason stated

Aaron didn’t pitch in the ChiSox win over the Dodgers.

Youk went 0-for-3, walked and scored a run in

the BoSox win over the Nats.  He lowered his

Philip Weintraub, nicknamed Mickey died on this day in

He was primarily a reserve outfielder, though he was

platooned at first base in the last few years of his career. He

Through 2006, he had the 4th-best career batting average of

Greenberg, Buddy Myer, and Lou Boudreau. Blessed with an

excellent eye and bat control, he walked 232 times in his

career while striking out only 182 times.

Weintraub was a heavy hitter in the minors. In 1934, he was

helped to the first .400 season in Southern Association history

by Nashville Vols manager Chuck Dressen’s ability to tip him

In 1939 with the Minneapolis Millers in the American

His professional debut was on September 5, 1933, for the

base percentage, in 31 games.

walks (64) for the Phillies

In December 1938 he was purchased by the Boston Red Sox

In November 1943 he was drafted by the New York Giants

from the St. Louis Browns in the Rule 5 draft.

In 1944, Weintraub returned to the majors with the Giants as

a war-time player after a 6-year absence. He was 5th in the

major league record, as the Giants defeated the Brooklyn

Amazingly, he missed the cycle because he didn’t get a

He had the last hit in Philadelphia’s Baker Bowl

In 1934 during spring training a Florida hotel refused entry to

Weintraub and fellow Jew Harry Danning. “Hibiscus” was a

hibiscus in our hotel.” Giants manager and All-Star first

Champion team to another hotel unless his Jewish players

were given lodging. The hotel’s management backed down

On Yom Kippur of 1938, Phil Weintraub and his Phillies

teammate Morrie Arnovich opted to take the day off.

One cold, windy afternoon in spring 1944, the Giants played

at the Lakehurst Naval Air Station, and the Navy staged a

sideshow by dropping baseballs from a blimp 400 feet in the

air to Giant players. Weintraub managed to make a catch.

Brad didn’t play in the Dodgers over the Angels.

RBIs, 2 runs scored and a stolen base (#6) against the

but he could just as easily been the Macher of the day!!

Craig didn’t pitch in the A’s victory over the Padres.

John had a lousy day.  In the one inning that he pitched, he

Ianetta, but somehow notched 3 strikeouts. He blew his

second save of the year and raised his ERA to 4.22.

Gabe went 1-for-3 in the Rays victory over the Mets, hitting

his 8th double of the year and knocking in his 16th run. He

raised his average to .228 and earned a pastrami sandwich

Ian went 2-for-4 and was practically the entire

offense for the Rangers in their extra-inning 2-1

loss to the Giants.  Ian accounted for 2 of the

Rangers 3 hits with one of his hits being a solo

part in 2 double plays!! His average rose to fall

Jason didn’t pitch in the Rockies win over the Pirates.

Aaron didn’t pitch in the White Sox victory over the Reds.

Scott didn’t pitch in the D-Backs loss to the Mariners.

Youk went 1-for-3 in the Bosox win against the

Braves, drove in a run and in a big surprise he

Dodgers coach for the rest of the season. He is in uniform for

batting demonstrations the following day.  It was a well-

known fact that Babe wanted to manage the Yankees and he

took the Dodgers’ job in an attempt to gain a managing job,

Let’s see if any of our guys delivered a Hall of Fame performance.

Ryan went 2-for-4, hitting his 15th double, driving in a run and

scoring two in the Brewers extra-inning victory over the

Indians on Wednesday.   His average increased to .321.

Ryan left in the 8th inning with lower back tightness.

Craig somehow earned his 7th hold of the year, in spite of

the A’s win over the Dodgers on Wednesday.  He faced 3

batters, with the first 2 – who eventually scored – reaching

base on a walk and an error.  This effort raised his ERA to

John pitched 2 scoreless innings and earned his 12th hold in

the Pirates win over the Twins on Wednesday.  He wasn’t as

his 2 innings of work.  He got out of a based-loaded jam in

the 7th inning, but only faced 3 batters in the 8th inning. His

Ian had a very busy and productive day for the

Rangers in their extra-inning victory over the

Astros on Wednesday, where he scored the

scored twice, with the last one being the game

winner.  And for good measure, he took part

in a double play.  His exciting day raised his

Jason didn’t pitch in the Rockies win over the

game back in the D-Backs win over the Royals.  It’s nice to

see that he has returned to his former level of

effectiveness.  This lowered his ERA to 2.25.

Scott has earned a Chai 5:

Youk had an uncharacteristically bad day on

Wednesday, going 0-for-4 with three strikeouts

proud!!!  Ryan had a HUGE night on ESPN’s national

broadcast of the Brewers/Indians game!

walk, stole his 5th base, scored four times and drove in five

runs in the Brewers’ 14-12 come back victory over the

RBI through June.  Thus, he should easily exceed his

higher average when the month ends.

Below are a couple of quotes from Ryan about Monday’s

“That was fun. Hopefully, it gives us some momentum.”

“Everybody feels better about themselves after a game like

this,” Braun said. “It’s a special night, one of those nights you

have to enjoy. They don’t come around very often.”

Now for some fun for me and my loyal readers (THANKS!!!!).

Here are some interesting pictures or items related to Ryan:

There is this very cool T-shirt:

This a website that has some interesting user designed items

related to Ryan.  You can also find some items that my son

Jordan designed on here as well.

Here is the design that clearly inspired the Hebrew Hammer

Here is Ryan showing his braun!!

These two pictures show Ryan at the University of Miami:

And for you bobblehead collector’s, here’s one of you know who!

And last, but not least, is this fantasy photo of the O’s new

left fielder, which would give us the top outfield in the game!!!

He look’s great in the Orange and Black, don’t you think!!!

On this date in 1939 – The greatest-ever gathering of

members and future inductees of the Baseball Hall of Fame

assembles in Cooperstown, N.Y., for the dedication of the

Let’s see if any of our guys delivered a Hall of Fame performance.

The Dodgers had an off day yesterday.

trying to stretch a double into a triple.  His homer brought the

Brewers within one run of the Rockies, but Mat Gamel struck

out with a Prince Fielder at first.  He was a busy boychik!!

Troy Tulowitski being called out at 3rd on Ryan’s throw.

Craig didn’t pitch in the A’s win over the Twins.

John didn’t pitch in the Pirates win over the Braves.

Ian went 0-for-4 and struck out twice in the

Rangers 1-0 victory over the Blue Jays.  His

average continues to sink and now is at .265.

Jason is slated to pitch at home versus the

Scott is currently dealing with the unexpected loss of  his

wife.  My prayers are with him.

walked again!!  Now you know why he was

called “The Greek God of Walks.” He didn’t

score or drive anybody in.  His average

According to a couple of published reports, ABC approached

Macher of the Day Ryan Braun about being on “The Bachelor.”

Thankfully, Ryan turned them down, so we don’t have to be 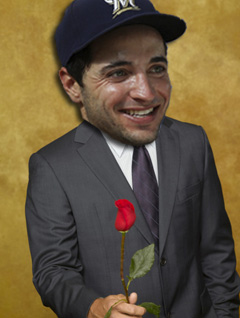 Brad didn’t play in yesterday’s loss to the Padres.

39th RBI, scored a run, walked twice and stole his 4th base

in the Brewers loss to the Rockies.  He was a busy boychik!!

Ryan was on fire!!

The Rangers’ game with the Blue Jays was postponed by

John pitched 2 scoreless innings in the Pirates win over the

Braves and earned his 10th hold of the year.  He struck out 2

and lowered his ERA to 3.67. John has been the main setup

small stretch has been very effective in that role.

John has earned another Chai 5!

The Rangers game with the Blue Jays was postponed by rain.

Jason didn’t pitch in the Rockies win over the Brewers.

Scott is currently dealing with the unexpected loss of  his wife.  My prayers are with him.

and walked in the BoSox victory over the Yanks

Jews on First
Blog at WordPress.com.